HOME » Blog » What is the difference between a portable power station and a portable generator?

What is the difference between a portable power station and a portable generator? 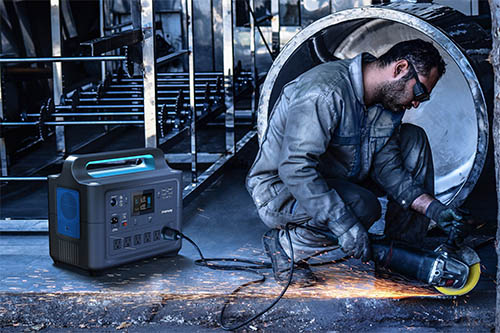 Portable gas generators are devices that convert different kinds of energies from different power sources into electric energy. These generators are driven by either water or a steam turbine, a diesel engine, and other supporting machinery to convert energy that can be generated by various sources including water flow, gas flow, fuel combustion, or even nuclear fission. This mechanical energy is transmitted to the inverter generator to be converted into electric energy, which makes them truly useful during an event like a power outage.

They can provide a wide range of output ranging from 1000 watts to more than 20,000 watts. Their maximum output is limited mainly because of the displacement of the engine. But the more the output, the bigger it will be, will consume more fuel, create more noise, and have far less portability. One of the most powerful portable generators that produce more than 10 kW energy is portable only for the sake of it and often requires wheeled carts to move around. 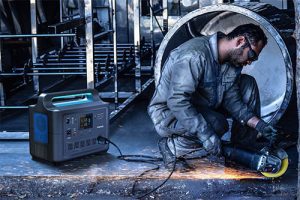 Advantages of a Portable Power Generator：

The control panel of a portable power generator has the capability of including several outlets and features including 15-, 20-, 30-, or 50-amp sockets. This is where they provide energy from. And they do it by burning fuel stored in the fuel tank that can be refueled as the generator consumes the fuel. This allows your portable gas generator to work continuously without having to give any break to your power supply.

They are capable of providing enough power output to light up your homes and RVs including small appliances like a mini-fridge, mini cooler, car charger and other such electronics, although you might have to install additional connections. Some generators also come with certain features that allow you to connect USB ports, CO detectors, digital panels, or even an app. Most portable generators provide at least one standard household outlet, while many also provide a 240 V output for certain appliances.

Disadvantages of a Portable Generator：

Portable generators are an efficient source of power, but they do have some limitations. While they provide AC current, it is rather risky to attach sensitive electronics like cell phones or laptops to them. This is not advisable unless your portable generator is an inverter generator or you have a transfer switch installed.

Secondly, most portable generators are powered by fuel, which means that are quite noisy, and require to you carefully handle combustible fuel in large quantities, which can be a fire hazard. The use of highly combustible fuels can be dangerous, especially if you are refilling the fuel tank while the generator is still working. In addition to that, the generator produces CO, which is a harmful gas if exposed for an extended period of time, or if the generator is used indoors.

What is a Portable Power Station?

Portable power stations, also known as battery-powered inverter generators or gasless generators, are a rechargeable battery-driven source of electric power that is big enough to power your house or your RV on camping trips. They have a combination of household AC outlets and USB outlets for connecting other devices to be powered. One of the main benefits of these power sources is that they provide high power along with portability. They usually provide energy till about 1000 W. However, there are variants that provide much higher power, but their portability is a lot less making them not xo.

The best portable power stations are extremely handy for usage in remote areas during power outages or on campsites as they are portable and easy to move. The downside, however, is that their maximum battery capacity is directly proportionate to their power in Watt Hours. That is, a 1000 W battery power station will store 1000 Watt Hours and will provide its maximum battery power for one hour. Hence, they do not prove to be an effective tool for backup power during extended power outages.

Advantages of a Portable Power Station：

Most portable power stations also feed their power through a control panel that usually features a range of outlets. They also have inlets in multiples giving the user a lot of useful options. The inlet is, however, provided to distinguish between the high amp and low amp charging. This makes it possible to charge portable power stations to be charged from a variety of high-power sources including household high amps or solar panels.

They excel in safety parameters. Since they run on a battery and there is no machine or moving parts used, they are very quiet. They don’t use any kind of combustible fuel, which means that they don’t produce any Carbon Monoxide and there is no fire hazard either. They convert the battery’s DC current into AC current, and so, they are quite safe for all kinds of electronic equipment and appliances.

Disadvantages of a Portable Power Station：

Even though portable power stations are quite efficient and produce enough power to provide electricity to a range of devices, they are not as powerful as portable generators. Another downside of portable power stations is that their run time is limited as they are operated by a battery. So, if the battery runs dry, then you will need an alternate power source to recharge the battery for the power station to start again. This means that you cannot use them for too long in an area where there is no availability of a power grid.

The DC output of a portable power station is mostly limited to 5 V and 12 V. Finding a power station that provides 240 V output can be a challenging task. So, you can use limited kinds of devices.

Although portable generators and portable power stations have corresponding features, they can’t replace one another. This is because of the following key differences –

What is the difference between a portable power station and a portable generator?

We sincerely hope that this detailed distinction will not only give you an idea of the main differences between portable generators and portable power stations, but will also provide you with the necessary knowledge to help you make an informed decision. If you would like to create your own brand of portable power station, please leave us a message and we will get in touch with you as soon as possible.

No comments to show.